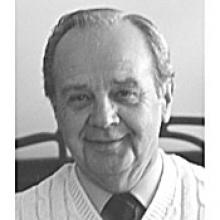 WARNER H. JORGENSON After a lengthy battle with Alzheimer's, Warner H. Jorgenson, aged 87 years, of Morris, passed away on Saturday, July 30, 2005 at the Deer Lodge Centre. He is survived by his children, Linda and husband Roger Miller of Lantzville, BC, and Patti and Chris both of Morris; brothers, Ben, Larry, Bob, and Leonard; sister Vera Saunders; as well as numerous nieces and nephews. He was predeceased by his wife Pat in 1992; brothers, George, Gordon, Ed, Morris, and Jack; and sister Audrey Mills. Warner was born in Canora, SK, and with his family, moved to Ste. Elisabeth in 1918. During The Second World War he served with the Royal Canadian Corps of Signals in the Mediterranean and Western Fronts. In England he met and married Pat, and they returned to Canada, and the farm, following the war. Upon his return, Warner became active in farm organization work, being elected as District Director of the Manitoba Farmers Union in 1951. He was elected to the House of Commons on June 10, 1957 as the P.C. Candidate for the Federal Constituency of Provencher, winning re-election in 1958, 1962, 1963, and 1965. During this time Warner was appointed Parliamentary Secretary to the Minister of Agriculture, and was also a delegate to the Food and Agricultural Organization of the United Nations. This Canadian delegation was successful in have the World Food Program adopted. On February 20, 1969 he was elected to the Manitoba Legislature in a by-election, and was re-elected in June 1970, 1974, and 1978. His term in government included Cabinet appointments to Consumer and Corporate Affairs, Government Services, and Minister without Portfolio. Warner was also very active in his community. He was a member of the Royal Canadian Legion, Morris Branch No. 111, Charter Member of the Morris Lions Club, and held executive positions on the Riverview Golf and Country Club and Valley Agricultural Society. If friends so desire, donations in Warner's memory may be made to the Alzheimer Society, South Central Region, Box 119, Winkler, MB R6W 4A4. The family would like to thank the nurses and staff of T3, Deer Lodge Centre, for their kindness and dedication to Dad. Cremation has taken place. The funeral service will be held at the Morris United Church on Thursday, August 4 at 2:00 p.m., with a private family interment in the Morris Cemetery. A reception will follow at the Southern Manitoba Convention Centre. MORRIS FUNERAL HOME 746-2451 Toll Free 1-866-746-2451