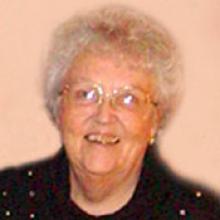 LEONA H. FRASER (nee WARDE) July 7, 1924 - August 8, 2005 Much loved mother, grandmother, and friend, champion of those in need, and adventurer, Leona Fraser passed away at the St. Boniface Hospital, on August 8, 2005, after a determined battle against her recent illness. Her son Warde and his wife Estelle; two grandsons, Colin and Nick; and her brother-in-law Alex and his family survive Leona. Her husband Robert in 2002, her oldest son Dr. Ian Fraser in 1972, her brother Murray Warde and his wife Phyllis, and sister-in-law Ina Fraser predeceased her. Leona was born in St. Boniface the youngest child of Leo and Ellen Warde and she grew up in St. Vital and Norwood. She was married to Robert in May 1948, and after the birth of their first son Ian, Robert was given the opportunity to rejoin the Air Force as a pilot. Together they embarked on their life adventure together with their children moving around Canada and also including two postings to Europe. This lifestyle continued until Robert's retirement from the Armed Forces in 1972 at Gimli. Leona was a master of creating a home wherever she happened to be living and she was quickly recognized as a person who could be relied on to provide a source of comfort and advice for young women and men experiencing being away from their families for an extended period for the first time. She was actively involved in supporting local charities and those less fortunate wherever she lived and encouraged her children to follow her example. In 1976 they moved to Canyon Lake, near Vermilion Bay, ON where they constructed their dream home on the lot they dreamed about owning as a newly engaged couple. Together they enjoyed sharing their lake paradise with other members of their extended family and with their many Forces friends as they crisscrossed Canada visiting each other. The family would especially like to thank the nurses and support staff on 7A West at the St. Boniface Hospital for their compassion and consideration in caring for Leona and us during her final weeks and days. A service to remember Leona will be held at 2:00 p.m. on Thursday, August 11 at Glen Lawn Funeral Home, 455 Lagimodiere Blvd., Winnipeg, MB. In lieu of flowers, and in keeping with Leona's need to help those less fortunate donations in Leona's memory to the St. Boniface Hospital Foundation or a charity of your choice will be greatly appreciated. Arrangements entrusted to: GLEN LAWN FUNERAL HOME 455 Lagimodiere Blvd. 982-7550