‘One of a kind’ Len Amey, 89, spent two decades with CFL team

Len Amey was hardly a household name to most Winnipeg Blue Bombers fans.

But talk to anyone involved with the football club in the 1970s and 80s, and they’ll tell you Amey played an indispensable role in the CFL team’s on- and off-field successes during that period.

More than 30 years after walking out of the team’s locker room for the final time, he is fondly remembered by both players and staffers.

“I loved Len Amey; Len was really one of a kind,” says offensive lineman Chris Walby, who played 16 seasons in Winnipeg (1981-96) and is a member of the team’s Ring of Honour and the Canadian Football Hall of Fame.

“Len wanted to give you that gruff exterior and military kind-of-guy attitude but, deep down, he was a gentle soul. The relationships he built with people were so important to him. I respected him and really liked him,” Walby says.

“When I look at the Bombers, I think of Len Amey. He was such a big part of that institution.”

Amey was looking to start a new career in 1970, after spending the previous 20 years with the artillery branch of the Canadian Armed Forces.

He met with a personnel selection officer at CFB Shilo to discuss his post-retirement options and was told the Blue Bombers were looking for a new equipment manager.

An avid baseball and hockey enthusiast, Amey figured he had nothing to lose by applying for the position.

A few days later, he received a phone call asking him to come to Winnipeg for an interview.

“Dad got off the phone and said, ‘I can’t believe this, we’re going to Winnipeg. I have an interview with the Winnipeg Blue Bombers,’” recalls his son James.

Amey met with then-general manager Earl Lunsford and head coach Jim Spavital at the team’s offices at old Winnipeg Stadium, and was offered the job a few days later.

For the next 20 years, he was the go-to guy for Bombers players whenever they needed equipment repaired, pants stitched or a new pair of socks.

While he may have been a generous soul at heart, Amey could be a penny-pincher when it came to his job. To this day, players recall how frugal he was when it came to handing out new equipment or post-game beers.

All-star linebacker James West played for the Blue and Gold from 1985 until 1992, and became close friends with Amey.

During the playoffs one season, running back Robert Mimbs asked for a new pair of socks a few hours prior to game time. Amey regretfully informed Mimbs he had no more socks and he would have to get his own.

“Mimbs was already dressed for the game and he had to walk across the street (to Polo Park shopping centre) to get some socks,” West recalls with a laugh.

Thriftiness aside, West says players always felt Amey had their back. “When we needed to count on him, he was always there.”

Former head athletic trainer/assistant GM Ross Hodgkinson began working with Amey in 1985. One of the things that impressed him the most was Amey’s ability to remain even-keeled amid the chaos on the field or in the locker room.

Despite sometimes giving him a hard time about his stinginess, Hodgkinson says players trusted Amey.

“Whether you were the athletic trainer or the equipment manager, you never wanted to be accused of being a pipeline to the front office or coaching staff,” he says.

“Some of the things you heard or saw in the locker room, you kept to yourself. Players respected that… I think they absolutely felt they could trust Len.”

James says his dad’s military training was good preparation for his job with the Bombers, especially when it came to getting the most bang for a buck.

“You really learn how to save a dollar in the army. You had to learn how to wheel and deal,” says James, who followed his dad into the military. “Dad learned how to stretch a dollar.”

He came to Winnipeg in 1952 for training, where he met the love of his life, Ruby, at a dance. The two were married in 1953, had two children (James and Susan) and were inseparable until Ruby’s death in 2005.

“Dad was always a quiet, loner type, but my mom managed to get through that. I guess opposites attract,” James says.

Amey’s military career took him to posts across Canada, including Shilo, Picton, Ont., and Gagetown, N.B.. He spent time in Churchill at the former rocket research range.

He also served for three years in Germany, where he helped test the M109 howitzer tank — one of the first Canadians to operate one.

Even though he put down roots in Winnipeg, Amey loved to travel. He and Ruby crossed the globe after retirement, including trips to warm-weather destinations like Jamaica and Barbados or just packing up the car to visit family and friends from coast to coast.

While Amey was proud of his careers with the military and the Blue Bombers, there was nothing he was more proud of than his grandchildren and great-grandchildren, James says.

“He was always kind of tough on the outside, but my kids and their kids got through that shell,” he says. “They made him turn to mush.”

Although the Bombers didn’t have quite the same effect on Amey, he continued to closely follow the CFL club’s fortunes.

In recent years, he was reunited with several retired players as part of a tribute to the 1984 Grey Cup-winning team at Investors Group Field (now IG Field).

“It was so nice for him to see everybody again,” James says. “It brought back a lot of good memories. He was in heaven. He really loved that.” 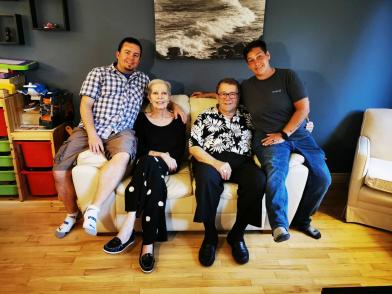